Review : I Kill in Peace by Hunter Shea 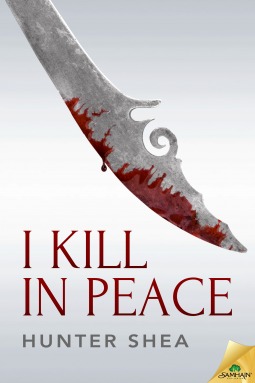 Peter Blades is, in every sense of the word, an ordinary man. Hard worker, father, husband, a man content with small-town life. Except for one small fact—he’s slowly being turned into a ruthless killer.

Compelled by mysterious texts to murder, he’s provided a fiery red Mustang and an ancient sword to carry out an ever-growing hit list. His jerkoff boss is victim number one. You always remember your first.

By the time his sword sings through the air to dispatch a would-be school shooter, taking lives is as easy as breathing. And if the world is going to hell around him, all the better. No one wants to burn alone.

Oooooooh. Well this book wasn’t what I was expecting!

Peter is a likable main character, he’s an ordinary office worker who loves his family and does everything he can to support them until he’s laid off by his morally dubious boss. When he’s sent a text message telling him to kill his boss, he obviously ignores it at first … but then it starts to seem like a good idea.

I thought that this book would end in an enjoyable but predictable way but it went off in a completely different direction and blew my mind! I can’t give much away because the surprising twist is something that’s threaded throughout the entire book.

The violence in this book isn’t too gory, it’s mostly ‘necessary’ and not too disturbing. What is disturbing is the behaviour of a lot of the characters in this book, I will warn you now that there is a scene of child abuse so be warned.

Shea has a gift for story telling, his writing style is simple and had me finishing this book in a single sitting. He knows how to spin a good yarn and hold your attention, as well as building suspense wonderfully.

I would recommend this book for fans of horror, dark fiction and psychological thrillers.

‘and that’s how you get ants’ – any book that quotes Archer automatically gains an extra star in my world!

← Review: Miranda’s Rights (Paranormal Detectives Book #2) by Lily Luchesi
Bookish People and the Internet: A Match Made In Heaven →

2 comments on “Review : I Kill in Peace by Hunter Shea”