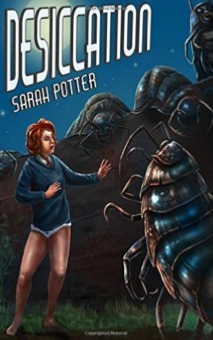 For those who love retro fiction that’s a blend of sci-fi, fantasy, and quirky British humour reminiscent of old B-movies…

Perched on the clifftops at Helmstone-by-sea, English boarding school Toffdene exists in splendid isolation, pretending the Swinging Sixties aren’t happening outside its walls.

Janet is a science scholarship girl who believes that all paranormal phenomena have a rational explanation, until she meets a hippie pixie who lives in a dimensional transcendental toadstool.

In the dark of the old tunnel leading from the playing fields down to the beach comes the sound of scuttling plus the sliding, slippery susurrations of hostiles yearning for blood; whatever is living there will stop at nothing to survive.

Soon the teachers and pupils develop a hive mind determined to ensnare Janet in its collective consciousness. Furthermore, the head girl has started to stalk Janet in a sexually predatory manner, seemingly possessed by the delinquent mod fellow who’s been hanging about the school.

The hippie pixie might have cured Janet’s acne with a single kiss, but his claim that he can fix what’s wrong with everyone else by mending an interdimensional rift is quite another matter.

——————————————————————
As I’ve mentioned before, I’m a B-movie buff and have been for years. I love sci-fi, absurdity and silliness – this book had it all! The cover first attracted me, I have many a DVD cover that looks similar and knew that this would would appeal to me in the same way. I don’t know what it is exactly but I just can’t get enough of this cover, it’s something about the bold colours and classic cheesy design that rocks my world so we have Jamie Noble Frier (awesome name or what?!) at http://www.TheNobleArtist.com to thank for that.
This book was reasonably short but as I’ve had a bit of a nightmarish week I’m disappointed that I had to finish it in a series of small chunks rather than just settling in one evening and working my way through in one go (no doubt I’ll re-read it in the next year or so when my trademark shocking memory has forgotten the plot so I can experience it for the first time all over again). The plot of this story was fast paced and really did read like a B-movie: it begins with our main character Janet arriving back at her boarding school after the holidays, she settles into her school routine and then things start getting a little bit weird. Her classmates start behaving oddly and there are some giant woodlice wandering about, as we can see from the front cover (giant woodlice. I LOVE this).
I was a huge fan of Enid Blyton’s Malory Towers series when I was a little girl and this book has made me nostalgic enough to read them all over again. The tone and language of this book is very similar to the old boarding school novels, when girls go for walks through meadows to picnic on boiled eggs and sardines. It just happens that this boarding school includes mind altering aliens and some very odd sexual tendencies (ok, maybe not that odd. We’ve all heard the rumours).

The characters in this book weren’t particularly deep or memorable, with the possible exception of Quillin the inter-dimensional pixie caretaker with a pechant for seducing schoolgirls. I found his character rather funny and compelling, with the ‘yeah, so what?’ attitude towards his being a pixie in a world under invasion by an alien race. That’s the thing I love the most about B-movies (what’s the book equivalent called?), that you have to accept the absurdities and move on if you’re going to get anywhere. The characters aren’t necessarily the focal point of the story, so much as the journey.
The ending of this book was very neat and satisfying, especially after all of the unexpected twists and turns it took to get there. The eccentricity and unpredictable story demanded a strong ending for it to be enjoyable and make sense, the author definitely delivered on that count!
This is absolutely the book for you if you’re a fan of ‘alternative’ sci-fi films, want a reminder of the old Enid Blyton novels with a twist or just want something different to read!

Sarah Potter is also a blogger and a delight to follow, so do have a nosy if you want to read about what she’s getting up to next!