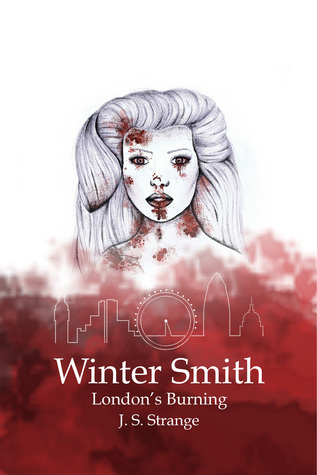 A story of survival trust and fear.
The first in the series, Winter Smith is ripped from a rich lifestyle and forced to survive…

The zombie virus has torn through the world, and Winter and a group of survivors must get to the Thames

Winter deals with the loss of her parents, the harsh reality of promised safety, and learns that not everyone can be trusted…

*Thank you to J.S. Strange for a complimentary copy of this book in exchange for an honest review*

This book was an absolute gem and got me through a pretty shitty weekend (I’ll explain later…).

I’m not easily spooked when it comes to books, or films for that matter, but there was something about this story that gave me the heebies and, to a lesser extent, the jeebies.

The story begins with a zombie attack which hints at the source of the infection and then moves swiftly on to introduce us to our heroine of the series, Winter Smith. She’s a disaffected teenager with a troubled past, her parents are too busy providing her with the early years they never had that they forget to be present for them, her status as a socialite makes sure that her every move is scrutinised by the media and… she’s 17. She’s not happy with any of it.

The zombie outbreak starts off slowly at first, people in the UK are denying that there’s a problem and that it could ever land on their doorstep (as we totally would) and keep going about life as usual for as long as they can until they have to wake up and smell the entrails.

Winter is at a celebrity party being held by her parents when they are attacked, she’s forced to flee and make her way to the Thames so that she can be evacuated to the relative safety of a refugee camp in Paris. Along the way, she meets other teens who are trying to survive in this savage new world – together, they try to make sense of what’s happening and get to safety.

The zombies in this installation are excellent, they’re fast and brutal but also quite stupid so the human characters have the ability to outwit them and escape which makes them scary but not invincible. The ‘virus’ is transmitted by bite, for certain, but there may be other ways that haven’t been explained yet.

Strange has a talent for suspense, the action scenes are perfect – they’re realistic and keep your interest without over describing events (I find that authors sometimes do this as if to prove to you that they really have done their homework). There are some creepy suspense scenes when you feel the characters are being crept up on that I adored.

However, I do feel that the way that the characters relate to each other is a little strained in places and that LGBT themes are shoehorned in a little bit too hard rather than flowing naturally- I’m pretty sure that this won’t be an issue in the sequel though, the writing style tangibly matured as the story went on and you could feel the confidence of the author building.

I will be following this series to its conclusion – these are the best zombies I’ve read in a while, with the right amount of action to character drama. This balance is normally very tricky to achieve and I think that Strange has nailed it!

To get a little bit more insight into what we can expect, I did ask my fellow countryman (I haven’t read anything else by a  Welsh author since starting this blog!) a few questions to whet our appetites for the rest of the series:

1) I’m placing your zombies as 75% rager (28 days later) to 25% shambler (Shaun of the Dead) on the Z scale… With this in mind, what are your top 3 tips for surviving the zombie apocalypse?
My tips for surviving a zombie apocalypse, other than run like hell, are: Find some survivors that you can stick with. Not only will they be good company, but you might be able to use their skills you our advantage. You don’t want to face an apocalypse on your own. The second tip is find somewhere secure. Don’t be out in the open, but don’t trap yourself. Third, I’d say to forget what we once knew. Laws, humanity – it’s changed the second the infection sweeps through the country.
2) This was a fantastic debut novel, where are you planning on going from here? (More to the series, spin offs, different stories altogether)
Thank you! I’ve been writing it since I was 17. I’m 21 now so it’s been a few years restructuring it. I’m planning to make Winter Smith a series, and I’m currently writing the second instalment. I’ve had majors writers block but finally I’ve got things down on the page. Almost finished writing it but I know I’ll have to go over it and re-write again. I’ve got lots of plans for Winter. I think there will be about four or five Winter novels, but I want them to have a purpose. I don’t want to drag out a series past its natural ending. However, Winter and her characters are so real to me I think after this series is done I will have a few years away from it before revisiting it again some time. But that’s in the future and way ahead of where I am now. In the second book, they begin their new lives in France. The zombies don’t come for quite awhile, but they learn a lot more truth to the apocalypse in France. They realise they’re doomed. And of course, I have other novel ideas so I’ll be writing a few other things. I would like to explore Violet Black’s story in more detail, so maybe one day there will be a Violet Black spinoff.
3) Your action sequences are amazing and varied, where do you get your ideas from for these scenes?
That’s a good question, and to be honest I can’t give an accurate answer. Winter Smith takes up about 70% of my thoughts. I’m always thinking of ideas, character arcs, plots…So I guess I see a location, or see something on TV or films, and adapt or tweak it. I wanted there to be many different locations, as they were travelling, and I wanted them never to have an escape planned. It didn’t matter if they escaped their first situation, because their second situation will be completely different. The scariest part is when they hide away in an office building, and the zombies get in. The design of the building would be great keeping the dead out, but not so good once the dead are in. I based this situation off a place where I work, imagining what would happen if the dead were outside one day.

If you want to learn more about this new author check these out:

While doing my research, I also came across this little gem of an article from a local paper which made me smile – this is a wonderful thing about Wales, local triumphs and successes usually make it into the media so we can all share!