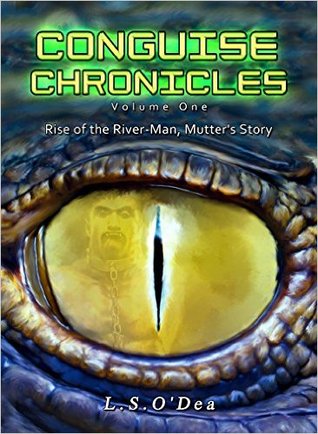 In a world where the Almightys rule with absolute power over the other classes, being an unwanted Guard is a death sentence.

A Guard’s life is never easy, but Mutter’s has been particularly hard. An orphan at five, he had to fight for his survival on the streets and then he fought in a ring for an Almighty. Until, he lost. His master didn’t give second chances, so Mutter sits in the Guards’ shelter awaiting execution. His only chance is to be adopted but no one wants a Guard like him: big, strong and ugly.

Then his luck changes when an Almighty arrives at the shelter and gives him a choice: kill or be killed. Mutter chooses to live.

Things are looking up until he’s taken to a laboratory and stuck in a cage but that’s not the worst part. He’s not alone in the lab. There are…things in the other cages. Things that don’t move or smell like anything he’s ever known.

Now, the Almightys are giving him some kind of serum and he feels good, but does he feel too good? Is he changing into something else? Something like the creatures in the other cages? Can he escape before it’s too late?

And I almost spelt the author’s name as L S O’Dear.

This is not a great day for me, I have caught some kind of ick and have wrapped up in a blanket shiver boiling….

Anyhoo, onwards to the important bit!

This is a short book at 125 pages on the kindle and the author makes full use of each and every page. I read it in a single sitting and 2 cups of tea (and between you and me, a couple of tissues near the end when I got a little teary).

To begin with, I’ll explain the structure of this series – Mutter is a main character in the Lake of Sins series (which I now have to read) and the main character of this book, and this is the first book in a spinoff series which I believe will be an collection of origin stories.

This book works perfectly well as a stand alone novella, though there are the odd references to the Lake of Sins throughout.

Mutter is a likable character, he’s the beast in this beauty and the beast scenario. Big, ugly, misunderstood and ultimately a gentle giant. I always love an underdog so I was immediately hooked.
He is a slave, used by his previous owner as a fighter, bought by a scientist who takes him to a dungeon and begins to perform experiments on him. He isn’t too wary to begin with, it’s his fate to allow his masters to do what they like to him and he seems to be feeling better after some old fighting injuries, however he’s warned by a fellow prisoner that the experiments cause the subjects to change in horrifying ways and suddenly he’s not quite so comfortable with this new arrangement.

The author has a gift for storytelling which draws you in from the very beginning, a gift that I will continue to enjoy as I jump in to the rest of the series as it happens! I absolutely adore origin stories, so I have a feeling that by reading the Lake of Sins series next, the Conguise Chronicles series will be all the sweeter.