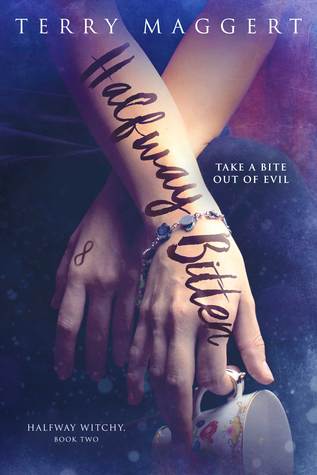 Take a bite out of evil.

The circus came to Halfway, and they brought the weird.

When clowns, vampires, and corpses start piling up in town, Carlie has to break away from her boyfriend, Wulfric, to bring her witchy skills to the table- or grill, as the case may be.

When the body of a young woman washes up in the lake, it unleashes a spiral of mystery that will bring Carlie, Gran, and Wulfric into a storm of magical warfare.

Spells will fly. Curses will rain. Amidst it all, Carlie will make waffles, protect her town, and find out if a man from the distant past can join her in happy ever after.

With love and honor at stake, Carlie has no peer.

This book makes me so happy.

I read it after a run of books that didn’t really impress me and it put me back on the path to total joy.

This book contains a number of excellent characters, each one with their own fascination. Carlie is my favourite character in this series, and favourite character so far this year – I think it’s going to take some serious competition to push my favourite witch off her perch.
She’s powerful, hilarious and loves cats and waffles – everything all great women should aspire to.

This book reads perfectly well if you’ve missed the first book in the series, you can instantly pick up on what’s going on so don’t be afraid to start here first.

This time, Carlie is investigating any connections between a travelling circus of mysterious supernatural nature which has arrived in town and some unexplained deaths in the area. I’m no going to add any more to that in the hope that you’ll just stop what you’re doing and read it immediately.

What I appreciated in this book as a development from  book 1 was that Carlie was a little less self centred, she’s starting to realise that her Gran won’t be around forever and that she will have to start coming to terms with losing people. Despite being very funny in her narrative, she did have some moments of more profound thought which balanced out the story nicely.

Her relationship with Wulfric, sexually charged Viking human/vampire hybrid is starting to heat up, which adds some romance to the story but Carlie being Carlie, it isn’t too squishy and cute – it’s mostly naked and amusing.

I’ll most definitely be pursuing this series to the bitter end, I think the author has created a fantastic main character who has a lot of potential for growth to keep things interesting and has created a world where anything can happen (and probably will).

It’s the comfortable first person approach to the narrative and the humour that has me so hooked, it seems effortless rather than the tooth grindingly awkward experience of reading a book where an author is trying too hard to be funny. This book genuinely made me laugh while reading it, which led to some pretty funny looks and demands as to what was so amusing (luckily, they agreed it was funny when I read the off extract, or it really would have been awkward).

‘It’s a scientific fact that if you eat while standing over the sink, it is neither a meal nor does it count against your alleged workout plan’ – Terry Maggert understands me.

← Review: Halfway Dead (Halfway Witchy Series # 1) by Terry Maggert
Not A Review: For A Change →