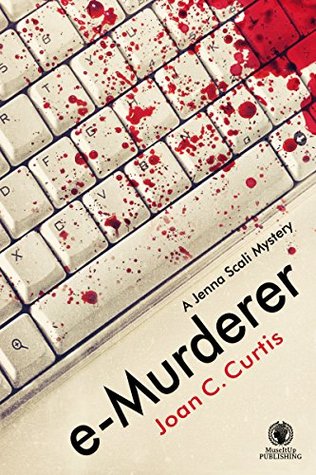 The e-Murderer won first place in the Malice Domestic grants competition for new writers before being published by MuseItUpPublishing.

On this anything but typical Monday morning, Jenna Scali, who works part-time for a shrink, opens an email that depicts the brutal death of a young girl. On that same day the police uncover a dead coed two blocks from Jenna’s house. The e-murderer’s description creepily echoes the death described in the newspapers.

When Jenna receives other emails, she takes what she knows to the police and thus begins her journey in the path of the e-murderer. Her curious nature impels her from e-messages to dead coeds to a ring of prostitutes. With the help of her quirky friends, Jenna learns that she’s more than a conduit for the killer. She’s his target.

THE E-MURDERER is a race to find a psychotic killer before he kills again.

This new mystery series with a young female sleuth promises to keep you glued to your seat until the last page.

I love a good whodunnit and this was a classic. It’s been ages since I was so tempted to flip to the back of a book to see who the bad guy was but thankfully I was reading on a Kindle so I couldn’t just pretend to *accidentally* open the book at the wrong page and *accidentally* glance at the page where all is revealed.

The story and characters are a teeny bit cheesy, but when all’s said and done, that’s what I really enjoyed about this book. The main character is a strong minded young woman who’s slightly obsessed with her amusingly named cats, Churchill and Stalin, and sets off to completely disregard all common sense and unravel a deadly mystery when she starts receiving sinister emails from an anonymous source regarding the deaths of some young co-eds.
Though she does have police protection available to her as well as a team of detectives on the case, she sleuths her way into danger and finally a dramatic finale. And there’s a hunky police officer. The supporting characters in this novel were underwritten a little bit, giving very little away which though useful when building up the mystery did make it a little bit hard to really trust anyone at all – in the best mystery books, discovering the culprit makes you feel like you’ve been betrayed by a friend just as the protagonist has rather than mildly indifferent.
There was also Quentin, the gay, British belly dancing instructor sidekick – I think this may have been overkill when it comes to sterotypes but I decided to just go with it. Hopefully he’ll develop more as a character throughout the rest of the series or he’s doomed to jump in with jazz hands at the end of every novel.
An altogether enjoyable murder mystery, though there were some areas of the story that I wish had been covered more fully. Without going into too much detail because the mystery really is what makes this book, we discover that one of the supporting characters is involved in some criminal activity but there’s very little explanation as to how they got there, their backstory or…. anything, really. I was quite disappointed because that could have proven to be one of the jucier aspects of the story!
The writing style was nice and simple, though with some curious repetition of the word ‘palpating’ which creeped me out (it’s a horrible word, just sayin’). The sense of suspense was perfect, dropping clues periodically so that you can’t work it all out right away. I would definitely recommend this book as an ideal holiday novel, provided you like murders with your mojitos.