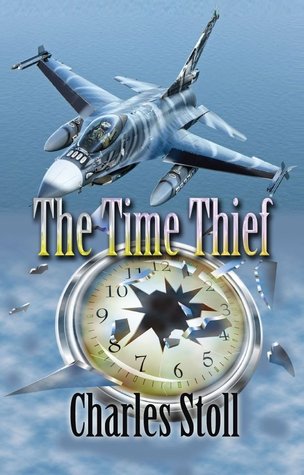 The Time Thief is one of those rare novels in which each of the five main characters has a true cause of their own: Professor Royale, whose theories on time are unique and provocative, will make the reader reevaluate their own concepts of time. The professor’s father, Marvin, Sr., who seeks the sweet release of death, dances with a skeleton and meets God. The father’s caretaker, Mildred, who has her own secrets and realizes her true purpose was not what she expected. The professor’s favorite students: Jacob, who puts his words into action, and his girlfriend, Sarah, who puts action into words, and in so doing, ends the war in Iraq.
Enjoy the comedic fallout as their life philosophies and goals intertwine, leaving the reader in an awakened state of mind, never to think the same again.

This book was the best combination of thought provoking, insightful and hilarious I’ve read in a long time.

This book focuses on people and their ideas and belief systems, well, five people specifically.

There’s the Professor, who is a very insular character who rationalises his decision to keep himself apart from the world to himself by saying that he’s dedicated his life to his work and taking care of his parents as well as creating convoluted theories about the nature of time, presumably to comfort himself that there will be enough left over for him to make an impact on the world. However, at the first taste of true freedom he goes wonderfully and spectacularly off the rails, ending up with a rusted bedspring lodged in his buttock.

The Professor’s father is equal parts insane and very shrewd, my favourite character of them all. Apart from the wellbeing of his son, his primary concern is the nature of God and what happens after death- everywhere he goes, he creates good humoured chaos which was a delight to read.

Jacob and Sarah are college students in the Professor’s class with different ideas on how to accomplish things, they’re perfectly suited to each other and determined to change the world.

Mildred is a wonderfully eccentric woman seeking to fulfil her destiny, though she’s not sure quite what it is as her grandmother neglected to give her the details before passing away. She does figure it out eventually, with the help of some mysterious strangers and helps the rest of the characters resolve their own issues (though you’ll never see the end coming!).

My favourite part of this book was the discussion of the concept of time – whether it has any meaning beyond that which we give it, personally I’ll be giving that one a bit more thought and study myself as well as the theory that everything in the universe is made up of vibrations – God being the universal vibration that is compatible with all things and everything else having its own distinct frequency.

Stoll explains these theories in such a way that they pique your curiosty but don’t jar with the comedic side of the book, like throwing jokes at your head while you stare at the wall in confusion (which is what I accidentally do to my dog when I throw a ball and haven’t realised she’s staring at the wall now because it’s Tuesday and somewhere a moth yawned).

If philosophy and comedy are your cup of tea, I would whole heartedly recommend reading this book!

‘”I think the definition of boring is when you do the same thing over and over and are satisfied with the same result,” Marvin, Sr. said’ = Charles Stoll, The Time Thief

← Review: The Warlock and the Wolf by Delfy Hall
Why I’m Cooling Off On The YA Genre →

2 comments on “Review: The Time Thief by Charles Stoll”