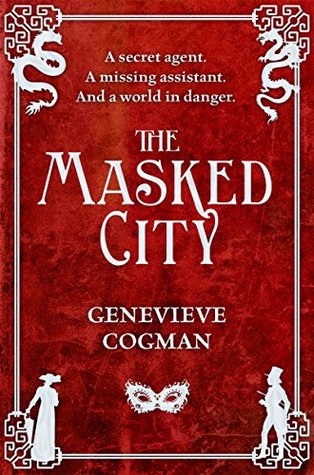 Librarian-spy Irene is working undercover in an alternative London when her assistant Kai goes missing. She discovers he’s been kidnapped by the fae faction and the repercussions could be fatal. Not just for Kai, but for whole worlds.

Kai’s dragon heritage means he has powerful allies, but also powerful enemies in the form of the fae. With this act of aggression, the fae are determined to trigger a war between their people – and the forces of order and chaos themselves.

Irene’s mission to save Kai and avert Armageddon will take her to a dark, alternate Venice where it’s always Carnival. Here Irene will be forced to blackmail, fast talk, and fight. Or face death.

This is another book I have read of late which is written by an author with an obvious love and passion for books, the entire foundation of this series is that books, language and the written word are supreme powers which rival magic.

The story takes place in 2 main locations, a universe similar to our own but set in 19th centure London and a high-chaos universe set in Venice and the masquerade. The alternate dimensions can be reached by creatures of power or by librarians by travelling through the interdimensional library itself- though this can only be reached via places full of books in whichever dimension to you happen to be currently inhabiting.

Cogman does an excellent job of tying in all the dimensions and creatures, weaving them in to our reality so that we can understand her ideas.

In this world there are 3 main factions which impact the universes;
Dragons – keepers of order, logic and power
Fae – beings of chaos, drama and magic
Librarians – neutral faction, collecting knowledge and books, look after the interest of the humans and try to maintain balance

The main character, Irene, is a librarian who is able to affect reality using ‘the language’. She is currently mentoring a young dragon of royal blood, Kai, who is kidnapped by the Fae who are determined to start a war with the dragons so that they can claim more territory. Irene immediately sets out to rescue him to prevent an interdimensional war, as well as being rather fond of the guy in his own right.

She’s brave, creative and very loyal and you can’t help but wonder what she’s going to do next and where she will take you. Up until now, she sees all of her successes as flukes and lucky escapes, however they are all subtly leading towards the conclusion that she is just starting to come into her own power and tip the balance between the three main beings in the multiverse.
I love her no nonsense approach to the Fae and their flair for the dramatic, as well as holding her own against the intimidating dragon royalty.

Aside from the excellent story, the writing and use of language in this book alone was awe inspiring. It’s very rare these days that I come across words that I’m not familiar with but I came across a couple in this one!

It’s coming across these gems that the author really shows her love of literature and how well read she is – granted, there are times when you come across fancier words when you think that the author is really just showing off, and in even worse cases, showing off but using the words in the wrong context altogether which just makes my skin crawl with embarrassment – neither of these are the case in this instance. Cogman chooses her words carefully and each and every one fits the story perfectly.

Of course, now I realise that this is the second book in a series and my reading backlog is longer than my hunger for chocolate is insatiable, I’m wondering precisely when I’m going to find the time to read the first in the series – all I know is that I will!

‘For a moment Irene wasn’t sure if she’s shattered bone or umbrella, but the man’s choked scream told its own story’ – Genevieve Cogman, The Masked City

← Review: Yonder – A Southern Haunting by LeeAnne Hansen
Well hey there 2016, I’ve been looking for you! →

2 comments on “Review: The Masked City by Genevieve Cogman”